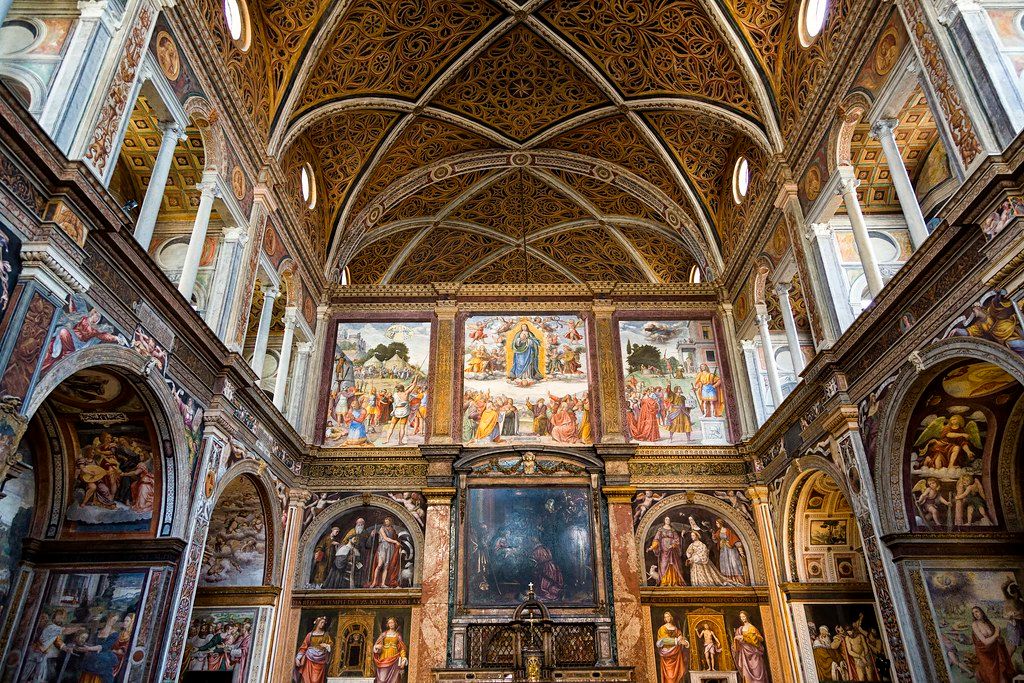 What makes it so special?
I love this site because it perfectly represents Milan: sober and elegant on the outside,  incredibly beautiful and rich inside. Milan is a shy lady, and in order to discover her hidden beauties, like secret gardens and noble palazzos, one must get intimate with the city. When you pass in front of San Maurizio’s anonymous gray façade on the vibrant and crowded Corso Magenta, you would never expect the treasure hidden within. But once inside, the 16th Century fresco cycle by Bernardino Luini covering the walls is an explosion of colors to dazzle the eyes.

How did you discover this treasure?
I found out about this site during my university studies as I participated in a project called “Milano Fuoriclasse,” in which I guided elementary school students through town to discover its heritage and culture. One itinerary was dedicated to the “Roman” Milan, with sites from the period in which Milan was the capital of the Roman Empire. San Maurizio was built partially reusing ancient Roman edifices, like the square bell tower which was originally part of the lost Roman Hippodrome.

How can visitors best experience this gem?
Visit San Maurizio either in the morning following a very Milanese breakfast at nearby Marchesi, making pastries since 1824… or before lunch at another very popular local spot in Milan –  La Brisa restaurant, offering outdoor seating in a lovely garden.

Instead of suggesting you order the typical Risotto alla Milanese with Ossobuco, I prefer to recommend that you order according to the season! For example, there are incredible Porcini mushrooms in the fall to have as an appetizer, as a primo with risotto, or as your main course with polenta or beef Tagliata.

What else can visitors see in the area?
Corso Magenta is the home of the Santa Maria delle Grazie church, where Leonardo da Vinci’s “Last Supper” masterpiece can be found. Also, Corso Magenta is also home of the Vigna di Leonardo (Leonardo Vineyard), another hidden gem of Milan. And if you’re up for a short walk, the impressive Castle Sforzesco is just a few minutes away. 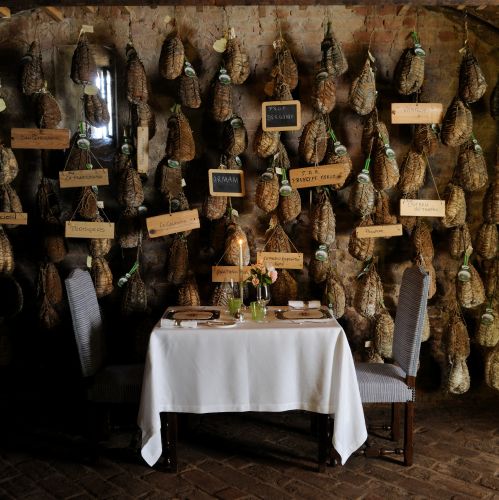 In Emilia-Romagna, Tommaso Mardegan from DMC N2S introduces us to Antica Corte Pallavicina’s culatello, one of the most prestigious cold-cuts of the Italian tradition.

The story:
Right in the middle of the fertile Po Valley you find in Fidenza one of the most charming courts of North Italy: the Antica Corte Pallavicina.

The legendary Spigaroli family are not nobles but a family of farmers that have transformed the fertile land into a kingdom of refined products and agriculture. Among a myriad of traditional products, they became famous for the world’s best culatello: a prestigious pork cured from 18 to 37 months.

What is special about Antica Corte Pallovicina?
The mustachioed patriarch, Massimo, is such a master that he collaborates with Prince Charles of Britain’s Welsh farm and was invited to act as a consultant gourmet and pork butcher.

On our first visit a sign reading Museo del Culatello – Culatello Museum – immediately caught our eye. This secret cellar built in 1320 holds corridors of more than 5,000 culatelli aging in the humidity and semi-darkness like a gourmet labyrinth. There is also a VIP area where you can find meats chosen by the most famous international chefs and royal families.

Nowadays, a large part of these cellars is utilized for cookery and masters classes on culatello, seminars on art, wine, and typical local products, and intimate candlelight dinners.

How is it Best Enjoyed?
Culatello is simply delicious with a piece of bread, but it makes an excellent ingredient in many dishes. At Antica Corte Pallavicina’s Michelin-starred restaurant don’t miss the chicken ravioli with a 12-year-old Parmesan fondue and culatello, accompanied by a local Lambrusco red wine. Divine! 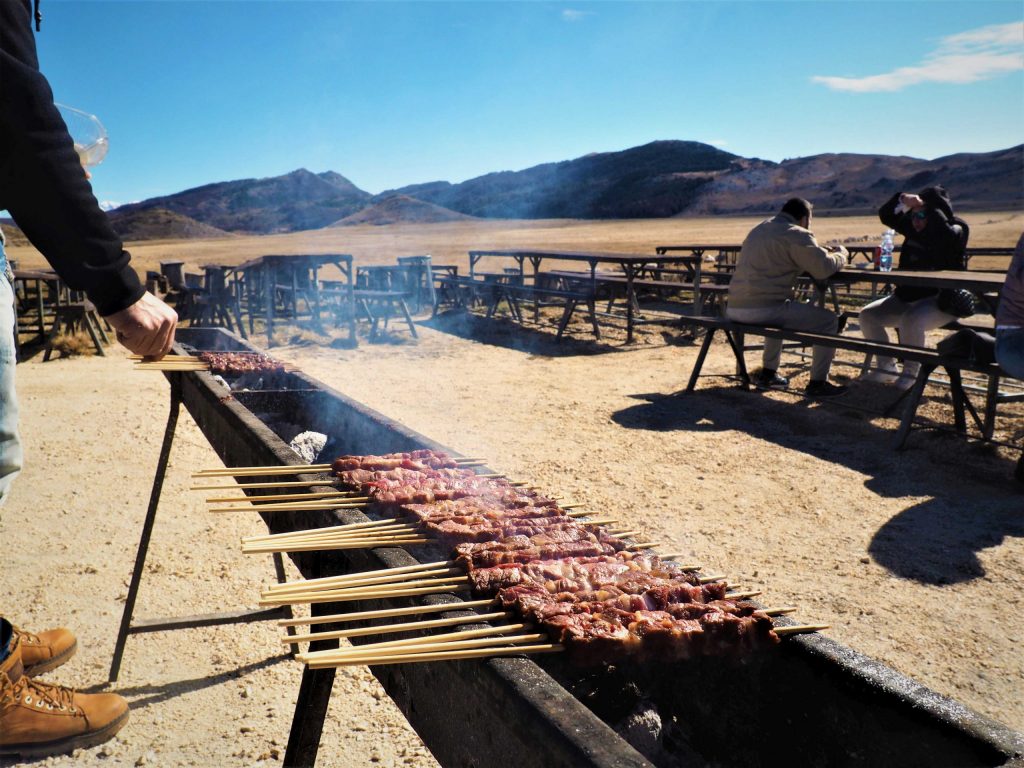 FROM OUR KITCHEN
Genuine Gastronomic Experience

Gastronomic Story:
One of the most impressive and scenic parks of Italy, Campo Imperatore is the largest plateau of Apennine ridge, located in Gran Sasso National Park in Abruzzo. Campo Imperatore’s nature is pristine, and the human intervention is very primitive: stone houses, wooden fences.

What was your great culinary discovery in the area?
Together with a friend who also happens to be a nature and trekking guide, we took an old-school 4X4 Land Rover Defender and set out through the great plain. When we stopped for a break at the unmissable “Ristoro Mucciante,” I knew we were in for a treat. This is the quintessence experience of the area’s “street-food” — or perhaps better called, “on-the-road food.” Passers-by can purchase local meat at the shop before cooking it themselves over open coals kept hot for just this purpose. Once the food is cooked to your liking, one can sit and enjoy the meal surrounded by mountains and views to die for.

What do you recommend first-time visitors try?
Our ideal menu would consist of homemade bread and local goat cheese to enjoy as an appetizer, followed by roasted sheep skewers – arrosticini – and roasted livers. Wash it all down with a bottle of local Montepulciano d’Abruzzo wine, and for 10 euro per person, you’ve lived an authentically Abruzzese moment. 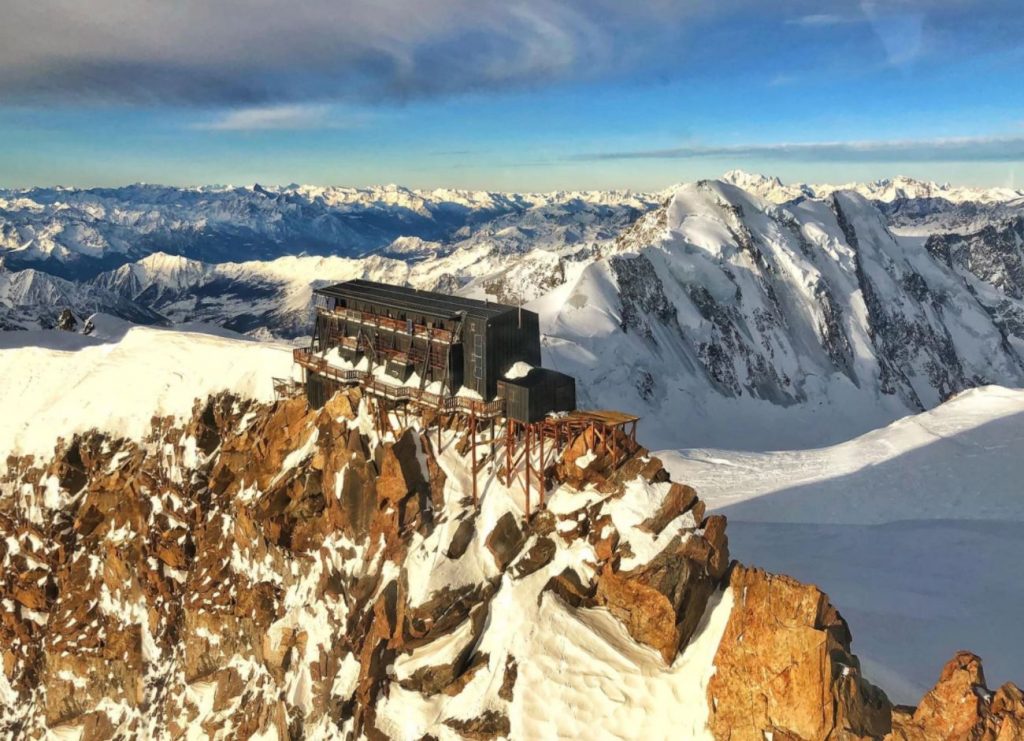 Tommaso Mardegan from DMC N2S Italia offers a challenge for mountain climbers on an “Alpine safari” to visit two incredible shelters high above the clouds of Aosta Valley.

What is the local hidden treasure?
Capanna Margherita and Bivacco Gervasutti are pretty inaccessible places in the Aosta Valley region, but they are absolutely worth knowing. Expert hikers can reach these two out-of-this-world mountain huts located on some of the region’s famous peaks, and even stay overnight.

What makes them so special?
The extreme location of these huts offer breathtaking views of the area, and the space-age design and precarious position straddling the mountain peaks will make you feel like the star of your very-own Bond movie.  The photos say it all!

How did you discover this treasure?
One day my brother David – an extreme sports enthusiast, free-climber, and expert hiker – took me out for a full-day excursion to Capanna Margherita. After nearly 4 ½ hours of difficult hiking, I could not believe my eyes! The views are from another planet: the balconies sit on the clouds and are the perfect place from which to watch one of the world’s best sunsets. At 4,556 meters on the Monte Rosa massif,   second only in the Alps to Mont Blanc, it is the highest refuge in Europe and houses an important laboratory for scientific research. It’s name is an homage to Queen Margaret of Savoy, who stayed overnight in the refuge’s inaugural year of 1893.

Alternatively, Bicacco Gervasutti, sits 2,835 meters above sea level on a Mont Blanc glacier. This modern refuge was designed and built by the Italian architects Luca Gentilcore and Stefano Testa, using helicopters to fly in each section. The unique structure includes living and dining areas, and two sleeping quarters that can accommodate up to twelve people. Anyone capable of besting the challenging ascent from Val Ferret on foot is welcome to visit and stay in the hut. With solar-powered energy and internet access, this sleek Alpine shelter is a far cry from its older, draughty wooden ancestor.

N2S Italia designs upscale experiences and events from “North to South” with an innovative and hands-on approach. For the two young founders, Tommaso from Milan and Letizia from Puglia, the definition of luxury includes authenticity and truth and they are committed to promoting real people and inaccessible places.