The Essence of Romance in a Floating Dreamscape

The mystery of Carnevale and the serenade of a gondoliere song: Venice is a storybook. She suggestively invites you to wander her twinkling waterways and bridges suspended in time, past Renaissance and Gothic palaces, across the great expanse of St. Mark’s Square, and up the Shakespeare-inspiring steps of Rialto Bridge. Cruise the aquamarine waters of the UNESCO World Heritage lagoon, getting lost in the picturesque colors of Burano Island. Admire the artistry of fine glassblowers on Murano Island and browse priceless modern art at the Peggy Guggenheim Museum. With a Venetian spritz or bellini in hand and some local cecchetti on your plate, let yourself be enchanted by the city of Marco Polo, Casanova, and Vivaldi: La Serenissima, the most romantic place on earth.

A photograph of the city through Carolina’s eyes 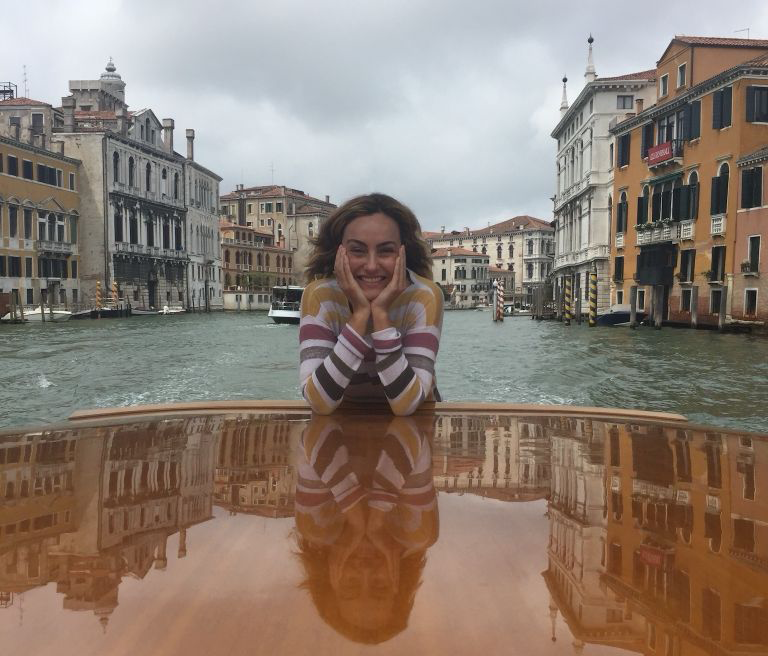 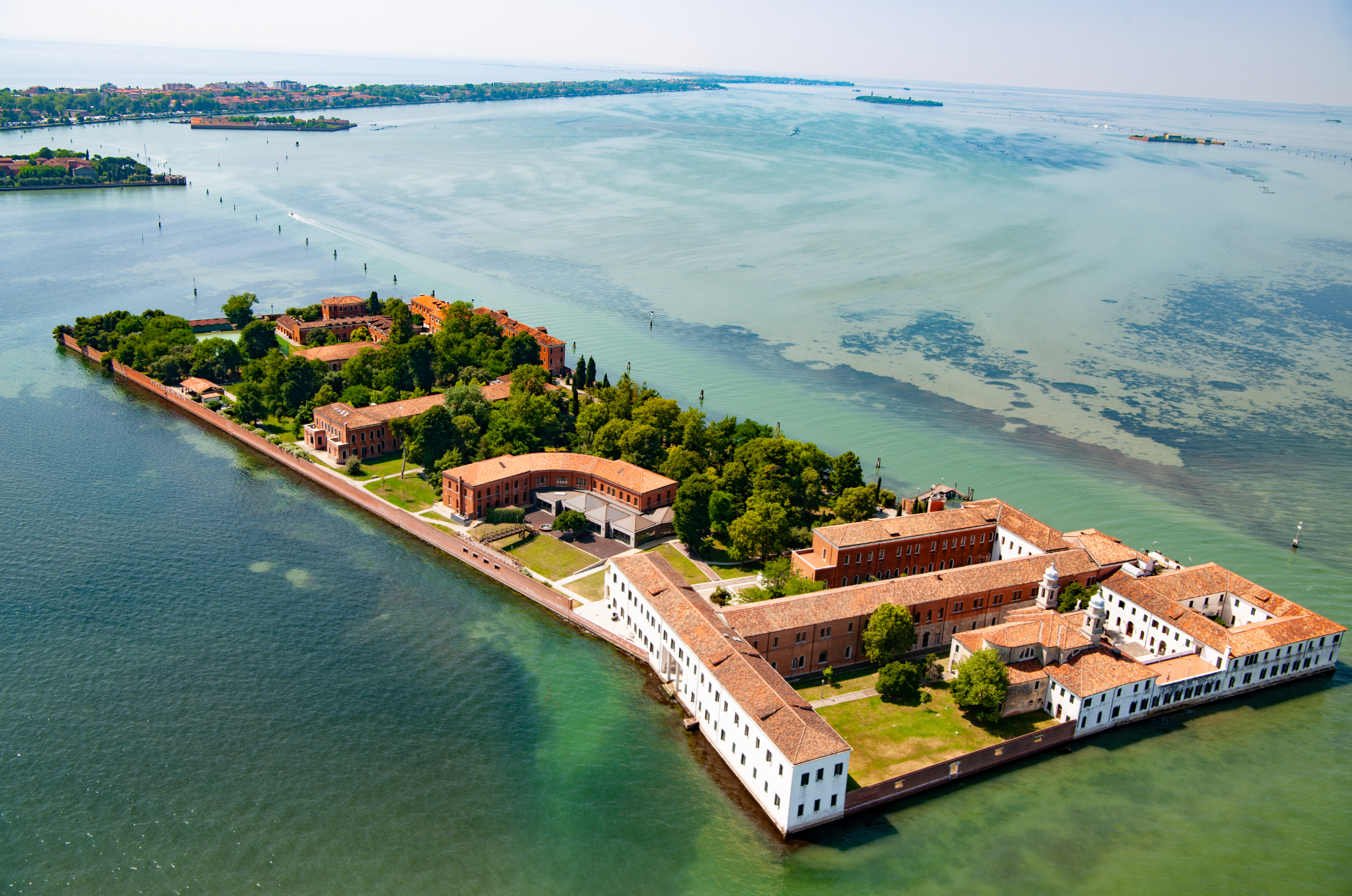 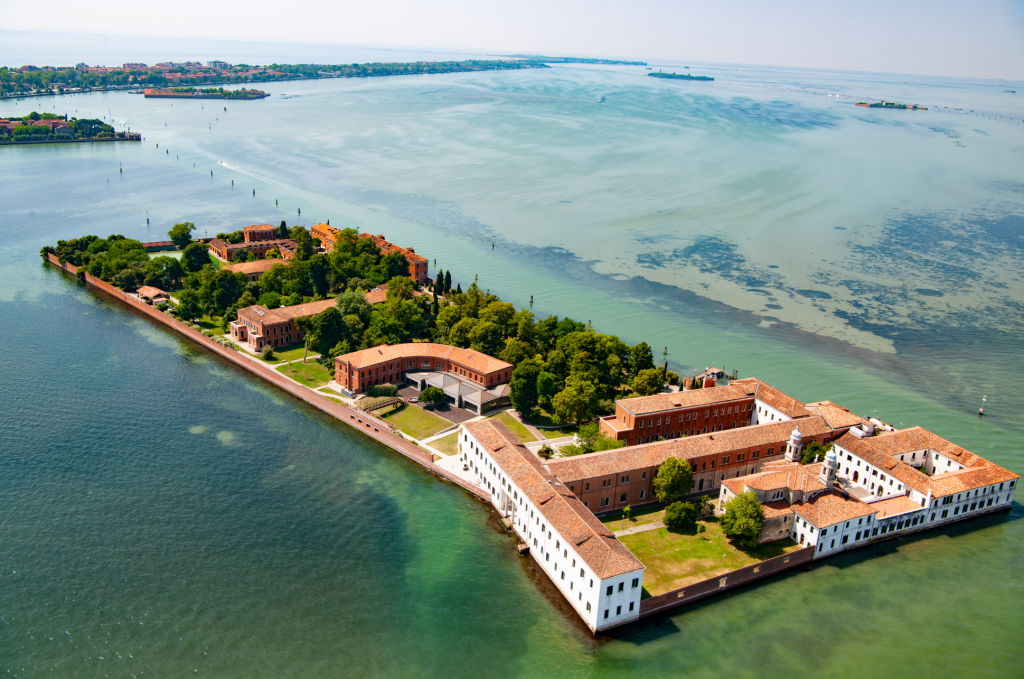 DMC Italy’s Best recounts one of the Venetian Lagoon’s little-known islands, San Servolo: a botanical escape with a fascinating history.

What is the local hidden treasure?
The unique character of Venice’s cityscape comes from its 118 developed islands. What some don’t know is that the city’s borders also include about 60 other islands scattered around the lagoon, some of which are inhabited. One of these is the hidden treasure of San Servolo, located in the southern lagoon not far from San Marco and the Lido of Venice.

The island has hosted various religious communities since the 9th century. At the beginning of the 1700s it was used by the Venice Republic as a military hospital, but increasingly it was chosen as the holding place for so-called “madmen”, eventually becoming a provincial asylum. To meet the growing demand for patients and to provide adequate care, the island was manually expanded and quadrupled in size, creating a large park and several building complexes.

In 1978, the laws in Italy enforced the closure of all asylums. The island of San Servolo became the subject of restoration and began to host various institutions, such as the San Servolo Foundation and the Venice International University, a higher education consortium in which many Italian and international universities participate.

What makes it so special?
The island’s once tumultuous past has bloomed into a serene green space so accessible from the city. The park is a botanic haven, and its microclimate permits such biodiversity where even tropical plants can grow. The atmosphere is vibrant thanks to the many international university students who visit, yet it is also beloved by the Venetians. In recent years, the island’s spaces have been used to organize summer camps for children, courses and workshops for families, and private events.

In addition to the wonderful park, you can visit the ancient church, the 19th century pharmacy, and the unique Museum of Madness which recounts the history of the island.

How can visitors best experience this gem?
For plant-lovers, May to September is the best time to enjoy the blooms. However, even the winter months can surprise with a magnificent sunset over the lagoon and a magical view of the city and its many small islands. 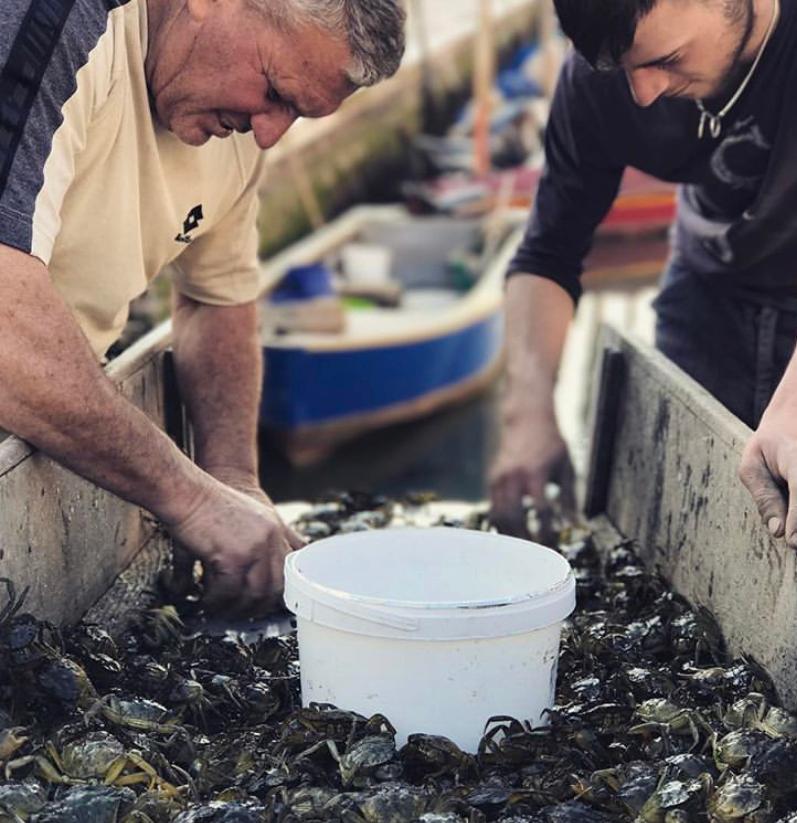 FROM OUR KITCHEN
MOECHE

Jennifer Virgilio from luxury DMC Queen of Clubs takes us on a journey through the Venetian lagoons to sample moeche, a typical soft-shell crab that is one of the most delicious, sought–after products of local gastronomy.

Gastronomic Storytelling
There are few fishermen, or moecanti, left to practice the seasonal fishing of the moeche crabs, which is concentrated in the period from March to May and from October to November. It is during this time, in fact, that the crabs molt and abandon their shell, becoming soft, hence the term moeche, which means “softness” in the local dialect. The crabs remain in their soft state for only 24 hours, which makes them an absolute delicacy and rare conquest. Aboard the typical bragozzo boat, now a symbol of sustainability in the balance of the fragile lagoon ecosystem, the secrets of moeche crabbing have been passed down from generation to generation.

Best Enjoyed
Visitors can climb aboard a bragozzo in the company of a local fisherman to cruise across the surface of the lagoon, stopping along the sandbanks to catch moeche and other typical species and then taste them cooked directly on board. Spend the day in the company of natural beauty and landscape accompanied by food and wine delicacies, strictly at a slow pace.

For more information about Queen of Clubs, click here. 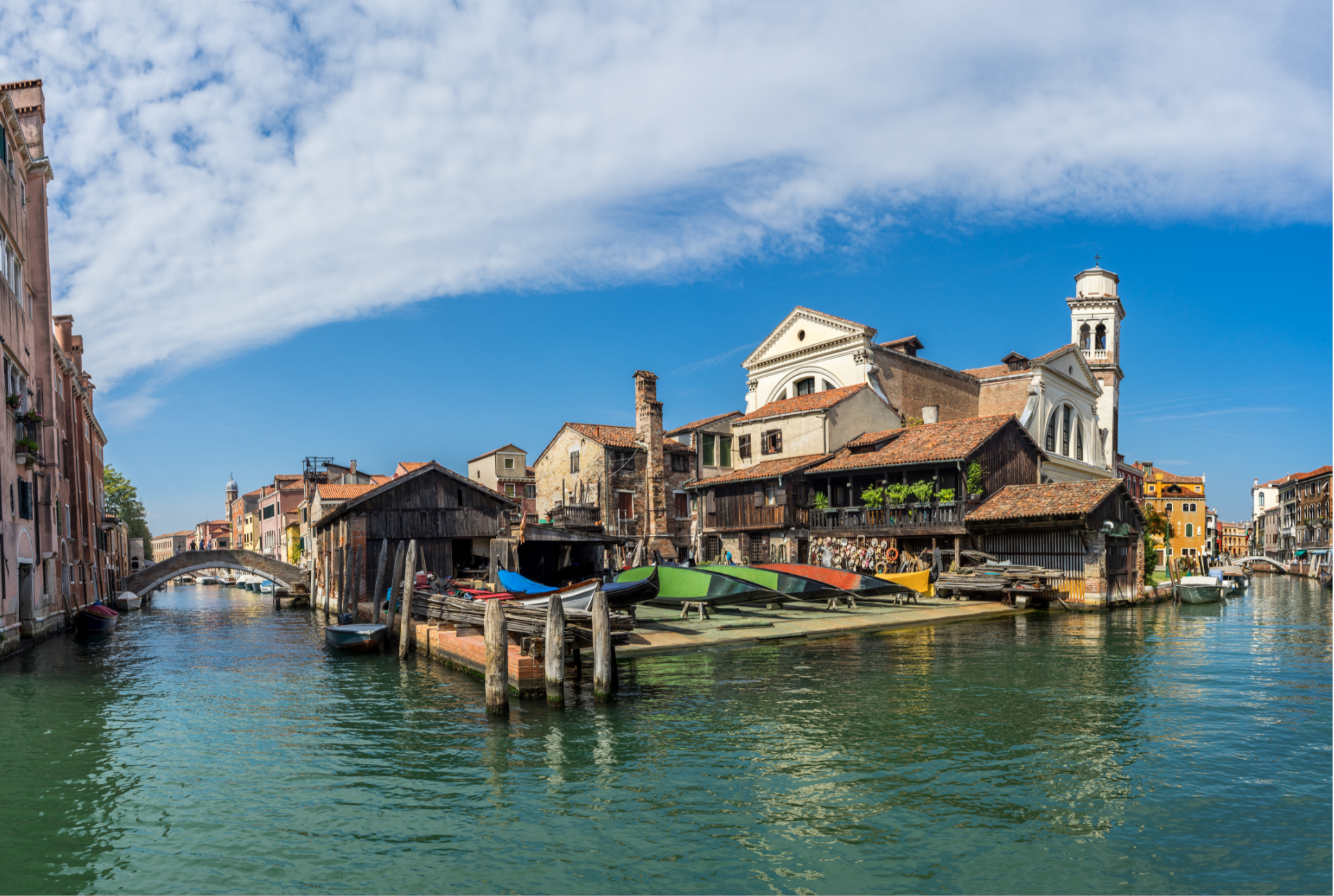 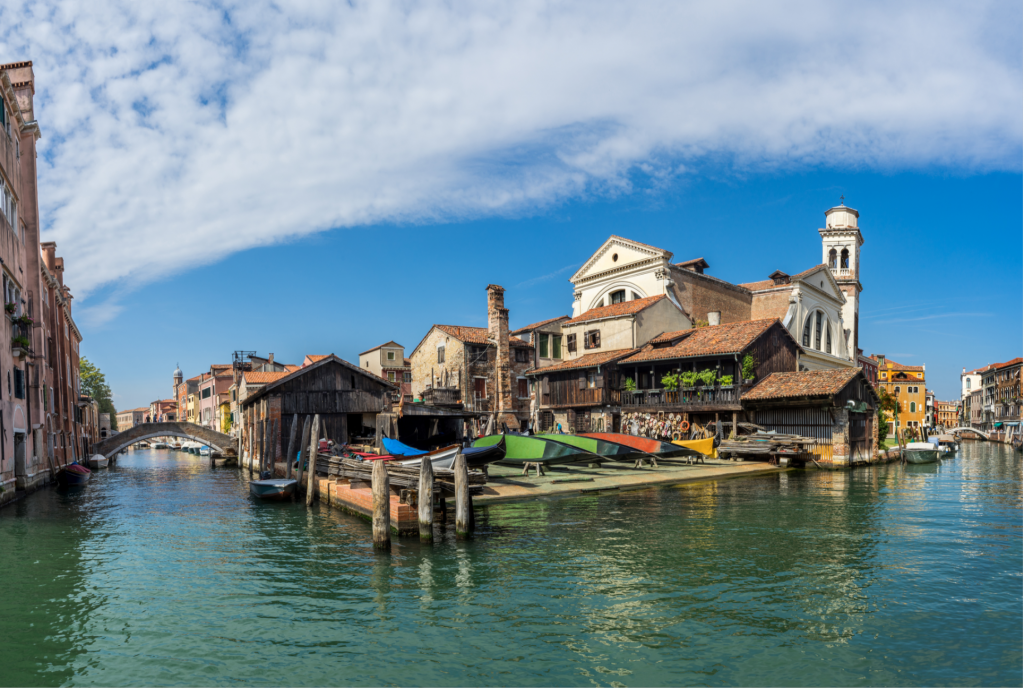 Luxury DMC Abercrombie & Kent takes us to discover some of the long-standing heritage of Venice’s traditional craftsmanship.

The art of the Gondola
The historical Tramontin Squero  workshop was founded in 1884 and specializes in the manufacturing of gondolas. Back then, Domenico Tramontin made some strategic changes to the gondola’s classic design, improvements later adopted by all other Venetian boat-makers and became the official supplier of the Royal House of Savoy, the police force, and many others. Nowadays, Elena and Elisabetta Tramontin are the fourth generation to run the Squero and continue the family traditions of building original Venetian gondolas.

The Art of the Forcola
In the floating city of Venice, the craft of the remèr, or Venetian oar-maker, has always been essential. The remèri of the city were officially recognized as a guild in 1307, but today, there are just three remèri active in the lagoon. At Saverio Pastor’s workshop, one can see the master work using centuries-old techniques to make oars and forcole, the typical Venetian wooden rowlock used in traditional Venetian boats. The Forcola is unlike any other type of rowlock, because the rowmen and gondolieri of Venice have developed a special rowing technique and position to propel the boat with a single oar. Without an expertly-crafted forcola, the lagoon’s well-known images of gondolas floating down the Grand Canal with upright gondoliers just wouldn’t be possible.

The Art of Rowing
Gloria Rogliani is Venice’s biggest female rowing champion and the most awarded woman in the field.

At her Cavana Tintoretto in the quiet neighborhood of Cannaregio, visitors can participate in a hands-on training session to learn how to row a typical Venetian boat, the colorful Batea da Fresco. Slide through the nearby canals under the expert eye of Gloria and her husband, Carlo, and put your balance to the test.

“At the table,
one does not
grow old.” 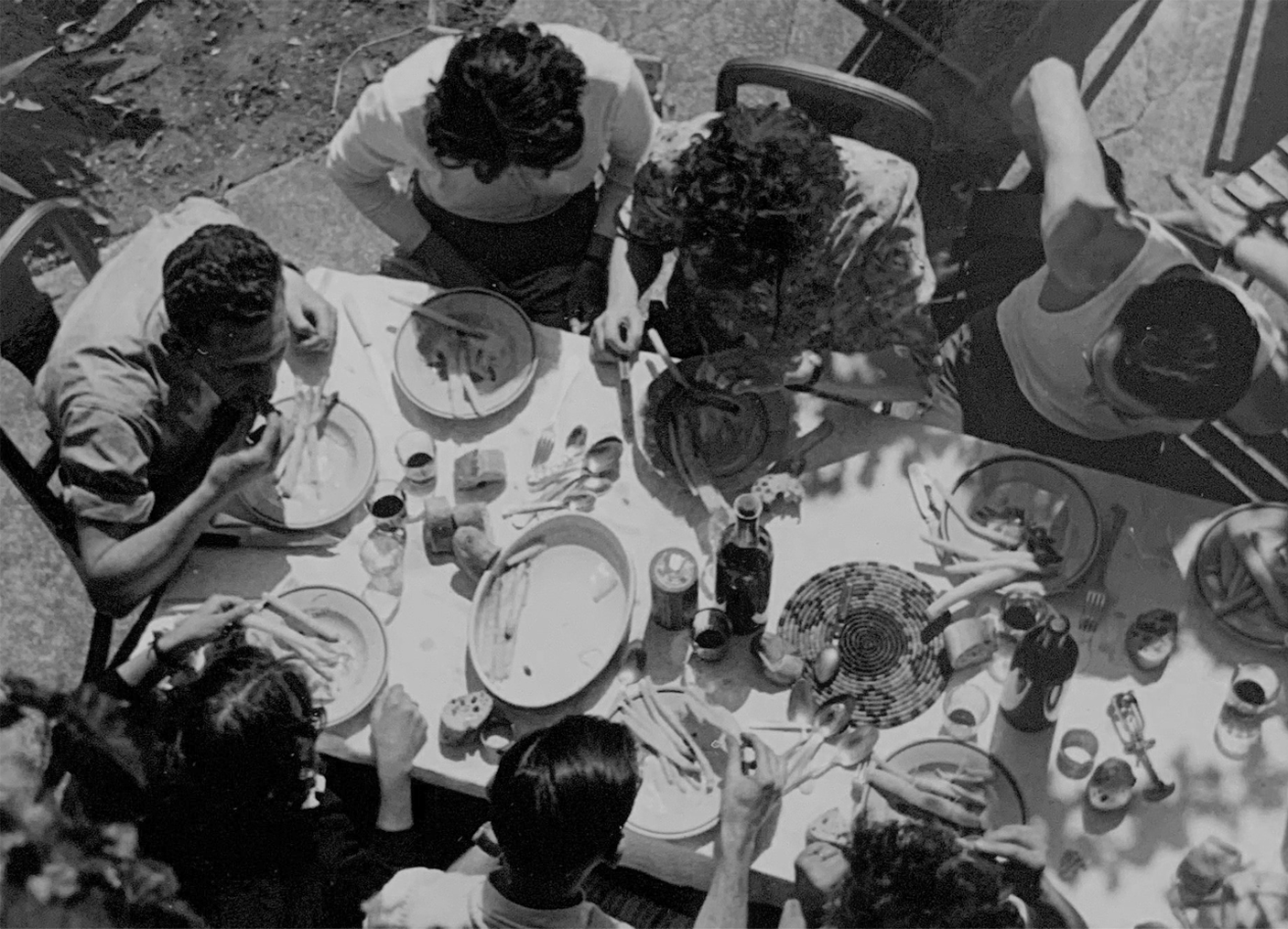 “It’s like crossing the threshold of reality to become part of a world of fantasy, creativity, and pure imagination: This is the magic of Venice.”

“Venice is like eating an entire box of chocolate liqueurs in one go.”